As the photographs below depict, we’ve come a long way since prehistoric man sat around a fire eating meat off the bone. Modern civilization has elevated the cooking process to an art. As such, presentation is as important as the meal itself. 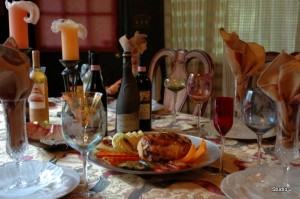 For those of you in the culinary arts who require photographs of your masterpieces for menus, brochures, websites or magazines and other publications, I’ve included these images. I shot the one on the left at a holiday dinner featuring Turducken, presented by Chef Walter Santschi.

Unless otherwise noted, these delicacies were the inspiration of and prepared by internationally renowned, award-winning chef Walter Santschi, C.E.C, culinary consultant, cooking instructor and private chef who, after travelling around the world, chose Port Townsend, Washington as his home.